Coalition for a Modern Metra Electric

Coalition for a Modern Metra Electric Co-Chair Andrea Reed discusses why lower fares and better service on the Metra Electric are more important now than ever in a new article published in Crain's Forum.

Send a message to your legislators with one click: Support lower fares and transfers on the Metra Electric!

Mayor Lightfoot opposes the demonstration project, saying she can’t support anything that causes CTA to lose riders. This is a short-sighted view that makes numbers on a spreadsheet more important than meaningful improvements to transit service for us and our communities.

We need the CTA to be on board with this project. To require their participation, two legislative bills have been introduced: House Bill 3834, sponsored by Marcus Evans, Jr., and Senate Bill 2277, sponsored by Bill Cunningham.

Demand a Metra Electric that works for you! 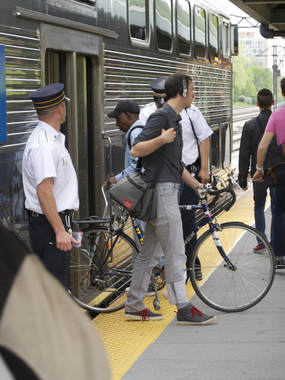 Tired of slow buses and high Metra Electric fares? Sick of living in a transit desert? Want transit justice for residents of the South Side and south suburbs?

The Coalition for a Modern Metra Electric is a group of Chicago residents and organizations that want improved service and connections on the Metra Electric. This means: This sort of fast, frequent and flexible service, on railroads like the Metra Electric, is found in other cities around the world and is referred to as Regional Express Rail, or RER.
Sign the petition now!
Download a printable petition (PDF) you can use to gather signatures in your community! Please contact us when you have signed petitions to submit.

Why a modern Metra Electric?

When the Metra Electric was built 100 years ago, it was designed to offer fast and frequent service. It offered frequent local trains within the city that operated like CTA trains to today, as well as express trains to the suburbs.

Today, however, trains come as infrequently as once an hour on the Main Line south of 63rd St. The South Chicago branch only has trains every two hours off-peak and on Sundays, as does the Blue Island branch during the day. It has no Sunday service at all. These infrequently-served stations are in areas that lack CTA express buses or other rapid transit service.

Meanwhile, CTA trains like the Green Line offer service at least every 10 minutes throughout the day.

Preliminary results from a study of mobility in South Cook County suggest that lowering fares on the Metra Electric (and nearby Rock Island line) to match CTA fares within the City of Chicago--and offering transfers to CTA and Pace--would increase Metra ridership by 33%.

With the right upgrades and fixes--many of which need to happen anyway as part of regular maintenance--the Metra Electric could once again offer fast and frequent service to the South Side of Chicago and south Cook County.

Learn more about the improvements that would make Metra Electric work for you!

The Metra Electric's historic route through the South Side of Chicago and south Cook County has stations near major destinations, including: New stations along the line could serve these destinations: Connecting Metra Electric to Chicago Union Station and O'Hare via existing tracks would create easy access to: